Tom Watts, 16, has been taking on the world of extreme sports thanks to his Lycra orthoses supplied by DM Orthotics. 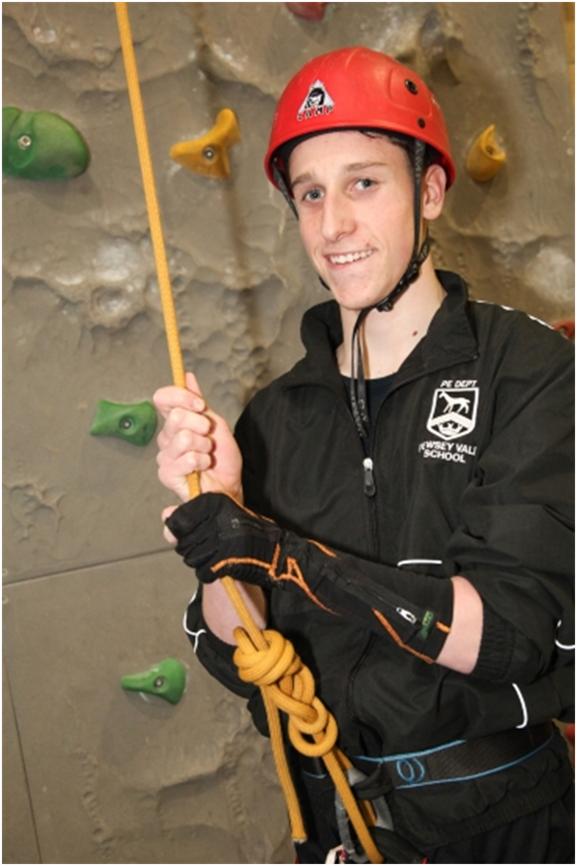 Tom suffered a stroke at the age of eleven which impaired the function and movement down his left side, preventing him from continuing to enjoy contact sports such as rugby. Now aided with DM Orthotics’ Dorsiflex Sock and more recently the DMO Glove, Tom is taking on Extreme Sports like climbing and mountain biking.

Tom was determined to get active again and tried a number of rigid carbon fibre splints for his foot before his physiotherapist recommended DM Orthotics’ Lycra version. Tom explains,

“I got through about three different types of carbon fibre splints, but because I was so active, I kept breaking them. They just didn’t last, or weren’t flexible enough to allow me to do the things I wanted to do.”

The Dorsiflex Sock works using a number of strategically placed Lycra panels which create forces to re-align the foot’s position, providing active dorsiflexion (lifting the foot up during walking and running).

“The new positioning stimulates the body’s neuro-sensory system and effectively, re-programmes the brain so that the muscles work in a new bio-mechanical state. There are a number of benefits to this including increased proprioception but most importantly it encourages muscle movement and usage.”

Tom says of the Dorsiflex Sock,

“The Dorsiflex Sock is great. Because it is made from Lycra it is really easy to put on. It’s so much more comfortable, nice and light and doesn’t rub. I don’t have to keep changing it over either like I did with the carbon fibre splints. I can just put it on in the morning and leave it on all day.”

Tom has been able to take part in a lot more activities that require a lot of leg movement with the Dorsiflex Sock and joined the Club of Extreme Sports at his local leisure centre.

“I can do a lot more running using the sock. I go to an Extreme Sports club - I do wall climbing, mountain biking, rocketball. The Dorsiflex Sock has definitely allowed me to do a lot more of these things.”

And there are also other aesthetic benefits, something which is important as Tom points out,

“The other great thing is that you can choose your own colours. Mine looks like a regular sports sock which is great in the summer, when people see it, they think it’s just a sports sock – it doesn’t draw the same sort of attention as a rigid brace.”

As a wheelchair user you will know that the ability to move your torso, stretch, reach and being able use your arms to their fullest extent has a huge impact on how you approach and can achieve everyday tasks.

Function starts with stabilising the pelvis, spine and shoulders.

The pelvis supports the spine and ensures your neck is free to move.  If your shoulder girdle is supported then arms are stabilised for fine motor and hand control.

Using a backrest that blocks and supports the pelvis in a slight posterior tilt and allows the spine to retain a functional lumbar curve will increase your upper body range of motion significantly.

You can test this for yourself.....slump down in your chair, collapse your spine down and bend your head forward and see how far you can reach forward, stretch up or twist – it’s not great and it’s also not easy!

By comparison extend your spine upward with a slight arch in your back your pelvis sitting against the back of the chair and try the same reach, stretch and twist, so much easier isn’t it?

The Roho Agility backrest is ideal for users who want to increase their function.  The Roho Agility is designed to allow your Therapist to fine tune the angle and seat depth of the backrest whilst you are sitting in the chair.  This makes finding your ideal functional position simple and fast without multiple transfers!  All this adjustment can also be done with just one allen key.

Roho Agility comes in three different contours, Minimum, Mid, Maximum, this mean you can choose the model most appropriate for you.  Roho Agility gives you the structural support you need without limiting your function.

To find out more about the Roho Agility backrests click here....